The CEQA Process–An Introduction for Landowners 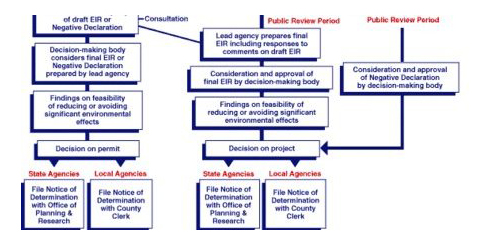 This post will outline the CEQA process in the context of a private residential development of seven or more new units.

Otherwise, we run the risk of being bogged down in the mountain of CEQA technicalities. You can follow this discussion visually with the CEQA flow chart provided to us by the CA government.

The first question CEQA asks is whether the proposed activity is a project. The full definition of a project, which I referenced above goes as follows:

Note that the emphasis I added refers to the two things that make an activity a project.

If you’re familiar with tentative maps, you know that a tentative map’s approval is discretionary. And new construction is a direct physical change. Thus, per CEQA’s definition of a project, every residential development is considered a project under CEQA.

For now, we’re going to skip projects that may qualify for exemptions. For residential development, generally they apply to infill projects when a property has already been developed. Thus, the potential for new or worse environmental effects is reduced. But again, there are exceptions.

Once the public agency deems that a project may have a significant effect, the fun begins. It starts with an initial study. These are reports that evaluate a project’s effects on 18 environmental factors.

The initial study determines whether an Environmental Impact Report (EIR) or a Negative Declaration (ND) is required. (More on what those are later.)

For many developers, the determination on whether an EIR or MND is needed is the difference between financial success and failure.

EIR’s must contain detailed discussions of potential environmental effects, methods to reduce or avoid the effects, and project alternatives. They often run up to 300 pages for complex projects. Here’s an example of an EIR for a project in San Francisco which fills almost 200 pages.

These documents require expensive professional consultants and hours of review by city staff. The total cost will run into the several thousands. The filing fee alone costs developers and builders around $3000. But the cost is not usually what kills projects. It’s the time delay. According to real estate attorney Nav Atwhal, the EIR process takes between 18 and 24 months. Often the process extends for more than two years.

This makes it difficult for developers to find investors, because they’re forced to wait for a long process to unfold. And once that process does unfold, the investors risk losing everything depending on the decision. That’s why a developer’s track record is so important. Investors are betting money on a developer’s ability to navigate a risky, complex process.

One of two things happens which result in an MND or an ND. One, there is no possible significant effect. So the developer files a Negative Declaration. Or two, the lead agency requires a mitigated negative declaration. In practice, the MND is much more common. With an MND, the initial study identifies potentially significant effects. Then the developer proposes mitigation measures to offset those effects. Hence, Mitigated Negative Declaration.

An MND must include:

Of course, you’ll still need to pay for hours of review and professional consultants. But these documents aren’t nearly as extensive as an EIR. The bulk of the work is already done in the Initial Study.

Whether CEQA requires an MND or an EIR, there will be an extensive public review process.

Until this point, the project has faced hurdles which required extensive technical expertise.

In public review, everyone gets a voice, from environmental and labor groups to your next-door neighbor. Developers must address their concerns or risk controversy and potential litigation.

This is where developers must employ a great deal of finesse. The length of the CEQA and entitlement processes are obstacles enough in themselves. Unaddressed concerns can lead to controversy at best and litigation at worst. Either one slows down the process, costing the developer valuable time and money.